How The Brain Shapes Pain And Links Ouch With Emotion 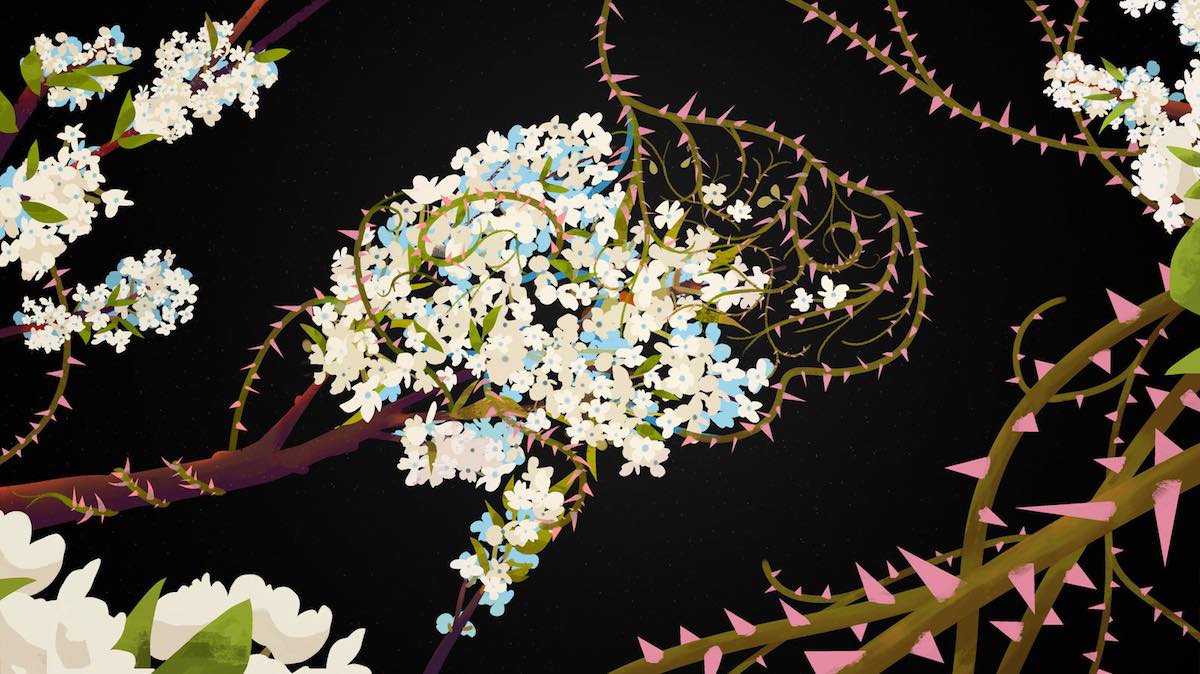 When Sterling Witt was a teenager in Missouri, he was diagnosed with scoliosis. Before long, the curvature of his spine started causing chronic pain.

It was “this low-grade kind of menacing pain that ran through my spine and mostly my lower back and my upper right shoulder blade and then even into my neck a little bit,” Witt says.

The pain was bad. But the feeling of helplessness it produced in him was even worse.

“I felt like I was being attacked by this invisible enemy,” Witt says. “It was nothing that I asked for, and I didn’t even know how to battle it.”

So he channeled his frustration into music and art that depicted his pain. It was “a way I could express myself,” he says. “It was liberating.”

Witt’s experience is typical of how an unpleasant sensation can become something much more complicated, scientists say.

“At its core, pain is just something that hurts or makes you say ouch,” says Karen Davis, a senior scientist at the Krembil Brain Institute in Toronto. “Everything else is the outcome of the pain, how it then impacts your emotions, your feelings, your behaviors.”

“Once they are activated, they trigger a whole cascade of events with kind of a representation of that signal going through your nerves and into your spinal cord and then all the way up to your brain,” Davis says.

And that’s when things get really complex.

Pain signals interact with many different brain areas, including those involved in physical sensation, thinking and emotion.

“There’s quite a pattern of activity that permeates through the brain that leads to all the complexities of what we feel associated with that initial hurt,” Davis says.

All that processing can have benefits, she says, like sometimes allowing us to ignore pain signals.

Say you’re playing hockey and you just got slammed into the boards, Davis says. “If you’re concentrating on that, you’re not going to be able to keep skating. So you need to be able to tune out the pain and deal with it later.”

Witt learned that he could tune out pain when he immersed himself in composing songs or painting.

“When I’m making art and music, I feel less pain,” says Witt, who is 40 now and makes his living as an artist and musician in the Kansas City area. “While I’m doing those things I’m so distracted from my pain that it’s almost like I don’t have it.”

But as a younger man, Witt still struggled with the emotional fallout from his back pain. He was depressed and felt like a social outcast.

Why does the brain link pain with emotions?

One of the scientists trying to answer that question is Robyn Crook, a biologist and brain researcher at San Francisco State University.

Crook studies the evolution of pain, and her lab compares the pain system found in mammals with its counterpart in squids and octopuses.

The most obvious evolutionary reason for pain, she says, is to prevent or minimize damage to the body. Touch a hot stove and pain tells you to move your hand away. Fast.

“In some animals with more complex brains there’s also an emotional or a suffering component to the experience,” she says.

In dogs, for example, pain appears to cause emotional distress much the same way it does in people. And there must be a reason for that, Crook says.

One possibility, she says, involves memory.

“Having that emotional component linked to the sensory experience really is a great enhancer of memory,” she says. “And so humans, for example, can remember a single painful experience sometimes for their entire lives.”

So they never touch that hot stove again.

And there may be another reason that people and other highly social animals have brains that connect pain and emotion, Crook says.

“Experiencing pain yourself produces empathy for other group members or other family members that are in pain,” she says. As a result, if one of them is injured “you will offer help to them because of the empathetic response or the emotional response to pain.”

That response has obvious benefits for animals that live in groups, Crook says. But an octopus is a solitary animal with no obvious need for empathy. So Crook’s lab is trying to figure out whether pain has the same links to emotion in these marine animals.

For people, the link between pain and emotion is a good thing. But sometimes it can also be destructive, says Beth Darnall, a psychologist at Stanford University.

“Mental health disorders amplify pain,” she says. “They engage regions of the brain that associate with pain processing. And they can also facilitate rumination and fearful focus on the pain.”

And when pain doesn’t go away, Darnall says, it can cause disabling changes in the brain.

“Pain is really a danger signal,” she says. “But once pain becomes chronic, once it’s ongoing, these pain signals no longer serve a useful purpose.”

Over time, these signals can lead to problems like depression, anxiety and stress.

That’s what happened to Witt in his teens and 20s. His pain led to negative thoughts and depression, which made the pain even worse.

But it’s often possible to break that cycle, Darnall says, by learning techniques that help pain patients gain some control of the way their brain is processing pain signals.

For example, she has a system for teaching pain patients how to slow their breathing and relax their muscles.

“This state of relaxation is an antidote to the hard-wired pain responses that are automatically triggered by the experience of pain,” she says.

For some patients, techniques like these can provide an alternative to pain drugs, including opioids. And for pain patients who rely on medications, she says, psychological therapies can often help the drugs work better.

“We have overemphasized pain as being a biomedical phenomenon that requires a biomedical intervention,” she says.

Witt, the artist and musician, agrees. He has lived with back pain for more than two decades.

But he doesn’t create songs or paintings about pain anymore. And he chooses not to take pain medication.

Instead, Witt says he stretches and exercises, watches his diet and works hard at staying optimistic.

“I’m actually not convinced that I have to live with this for the rest of my life,” he says. “I very well may. But at the same time I live in that state of mind all the time that there’s hope.”