Empathy seems like a good quality in human beings. Pure and simple. 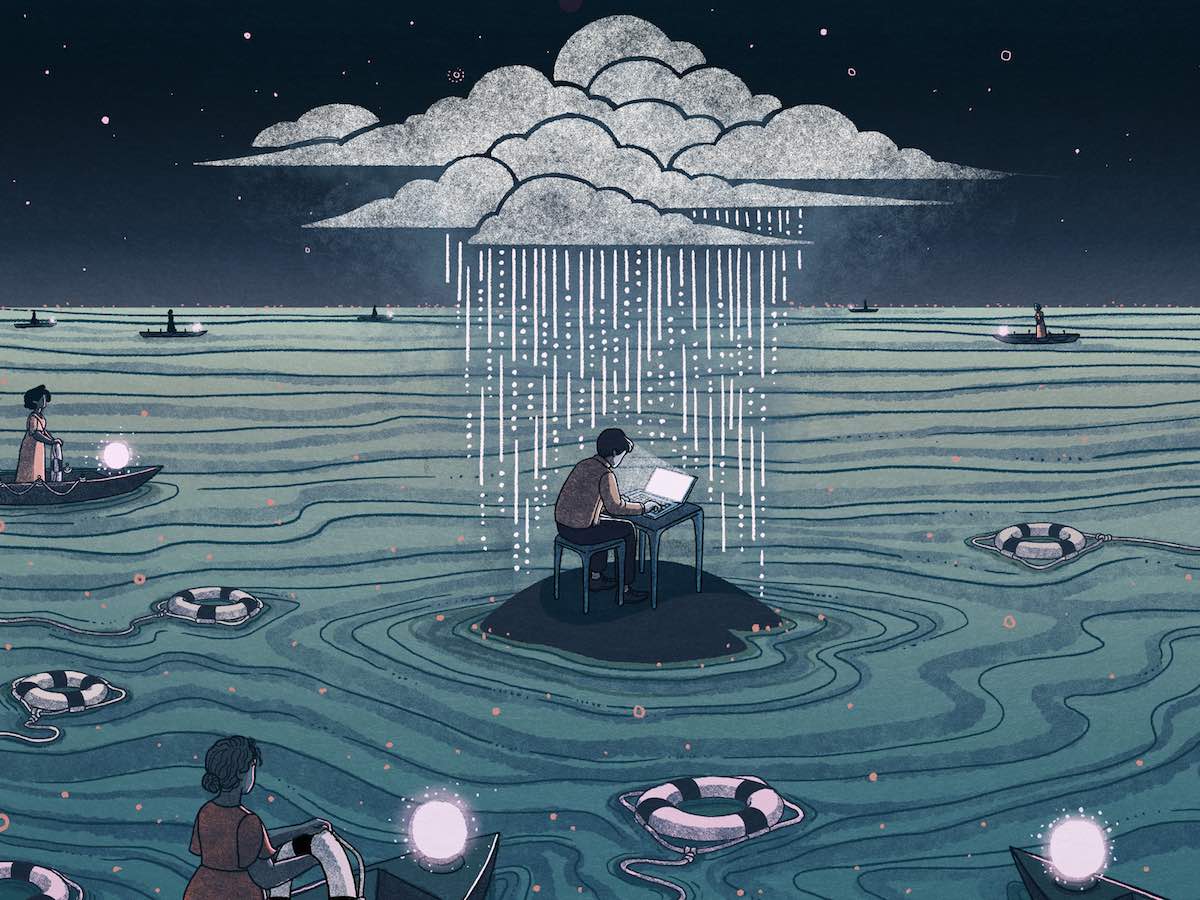 It allows us to consider the perspective of others — to put ourselves in their shoes and imagine their experiences. From that empathetic vantage point, only good things can come, right?

Not necessarily, according to author Fritz Breithaupt. “Sometimes we commit atrocities not out of a failure of empathy but rather as a direct consequence of successful, even overly successful, empathy,” he writes in his forthcoming book The Dark Sides of Empathy.

Breithaupt, who directs the Experimental Humanities Lab at Indiana University, argues that empathy is a morally ambiguous capacity, one that can lead us astray if we don’t understand its many sides.

“Empathy is a riddle,” Breithaupt says. While it can enrich our lives, Breithaupt says our ability to identify with others’ feelings can also fuel polarization, spark violence and motivate dysfunctional behavior in relationships, like helicopter parenting.

Breithaupt, who reviews the cultural and scientific history of empathy in his book, explains that empathy is a relatively new concept. The term only emerged in 1909, when it was translated from a German conception of “feeling yourself into a work of art,” he says. In the past 40 years, it has risen to prominence as evolutionary biologists started to explore its role in shaping the human brain. Since then, it’s become a core psychological concept, and part of what biologists think makes us distinctly human.

Since empathy is baked into our very being, Breithaupt argues that we must be aware of the good and bad it can enable. NPR’s Jonathan Lambert spoke with him about empathy’s biological and moral dimensions.

The following interview has been edited for length and clarity.

How does science define empathy, and what light does that shed on on more philosophical conceptions of it?

For a while neuroscientists thought there was an empathy center in the brain, some little spot somewhere. They thought we could understand this spot and then understand empathy.

But then they came to a much larger realization: Empathy is not in one place in our brains; it’s everywhere. Imaging studies showed that we use every part of the brain both for our own actions, our own feelings, but also for the observation of other people. So basically the whole brain does empathy.

That changes a lot of things. It shows us that empathy affects all our thinking. It’s with us every moment.

I think that means that empathy is so important to us that it’s something we can’t neglect. Yes, we’re biologically primed for it, but we also have to cultivate it, and cultivation is something that can [be a] lifelong learning task. It never ends.

So science seems to suggest that empathy is sort of baked into our being. I think most people might assume that’s a good thing. Why is it not necessarily?

I’m not going to try to convince you to say that empathy is bad or that we should be against empathy. I think it’s fundamental for us. It’s absolutely something that we have to understand to know how we operate.

I also think that in most cases empathy does more good than bad things. I want to put it in proportion — there are dark sides to empathy.

People assume that empathy is good because it is good for the recipient of empathy — I’m actually skeptical about this.

Empathy might be a little bit more selfish than many people assume. The empathizer feels less alone, they share experiences, they learn something. So we should ask for whom is [empathy] good? It’s actually the empathizer in most cases.

How is empathy good for the empathizer?

Beings without empathy live in their own world. They can’t really understand that other beings are out there with minds of their own. But beings with empathy understand that there are all these different minds around [that] have different experiences and different feelings. They can participate in them. Someone with empathy lives more than one life. Of course, sometimes that means that you have to carry the suffering of others, but in many cases their joy becomes your joy. So it’s a richer, much more complex life. And in that sense, of course empathy is wonderful for you.

But there’s a flip side too, right? In your book you talk about something you call “vampiristic empathy.” What do you mean by that?

Vampiristic empathy is a form of empathy where people want to manipulate the people they empathize with so that they can, through them, experience the world in such a way that they really enjoy it.

An extreme case of this is helicopter parenting. Helicopter parents are constantly trying to steer their kids in the directions they think are the right directions. Of course they want the best for their children. Very understandable; I have kids and I want what’s best for them too.

But I think there’s something else seeping in. There’s this sort of living along with the kids, imagining how it must be like to have a life that’s marked by successes, where obstacles disappear and life can be enjoyed. But that also means that the parents are co-experiencing that life, so they start taking over … they basically want to use the child almost as a pawn.

In a sense, extreme helicopter parents are robbing their kids of a selfhood so that they can basically project their own self into these kids.

You write that empathy can actually make us more polarized instead of bringing us together. How can that happen?

People imagine that empathy can help resolve tensions in cases of conflict, but very often empathy is exactly that thing that leads to the extremes, that polarizes people even more.

It can happen this way, be it a family feud or something that escalates to a civil war. Humans are very quick to take sides. And when you take one side, you take the perspective of that side. You can see the painful parts of that perspective and empathize with them, and that empathy can fuel seeing the other side as darker and darker or more dubious.

One example of this comes from Northern Ireland, which has a long history of conflict. In the early 2000s school administrators there tried to resolve the conflict between the Catholic and Protestant youth by bringing empathy into the curriculum.

They emphasized that students would learn both sides, and the atrocities committed by one side or the other were always put into context. Students learned this curriculum, but follow-up studies showed that this new generation was more polarized than the one before.

So what this group had internalized was there’s always two sides and, in the end, they know their side. So they reorganized this information to empathize with people on their side and withdraw from the other side.

So Northern Ireland had to abandon this project.

The other case is that of terrorists. I think a lot of terrorists may not lack empathy. Rather, they see some plight of a group they identify with — they see them suffering and see it as something horrible, and that becomes more extreme and activates them to become active terrorists.

Are there other downsides to empathy?

[Empathizers] may overextend themselves. If you are a medical doctor who sees a lot of suffering and pain every day, it can very quickly become too much. Something like a third of medical doctors suffer from “empathy burnout” that is so severe that it affects their functioning as doctors and their personal life. They become the victim of feeling empathy.

In the end though, doesn’t empathy cause more good than harm?

In one sense, yes. Empathy is weakly correlated with altruistic behavior. So there is a connection. I do think empathy can help people help each other, and that makes us human.

My core argument here is that in many cases of altruistic help or humanitarian aid, people actually don’t really empathize as much with the person in need. They identify more with the helper, the hero, the person who intervenes even if it’s an imaginary helper.

It can be good when it leads to good action, but it can have downsides. For example, if you want the victims to say ‘thank you.’ You may even want to keep the people you help in that position of inferior victim because it can sustain your feeling of being a hero.

If you want recognition and if that doesn’t come, it can turn into resentment. That’s an unfortunately common impulse. On the political scale, I think it happened in Germany. In 2015 Germany opened its borders, very laudably, to refugees. Initially there was a wave of huge enthusiasm, and then suddenly a huge drop in enthusiasm and a lot of resentment.

What are your big takeaways about empathy?

I think we can learn to use empathy in a somewhat controlled way. We can learn when to block it, when to not allow empathy to be manipulated and when to fully turn it on.

Yes, we are born with empathy, but it needs constant practice [to know] when to use it and when not to use it. So the dark sides are so important to know because they teach us that in some cases you shouldn’t empathize.

But when it’s good, we should embrace empathy, because it can lead to such richer, fuller lives.